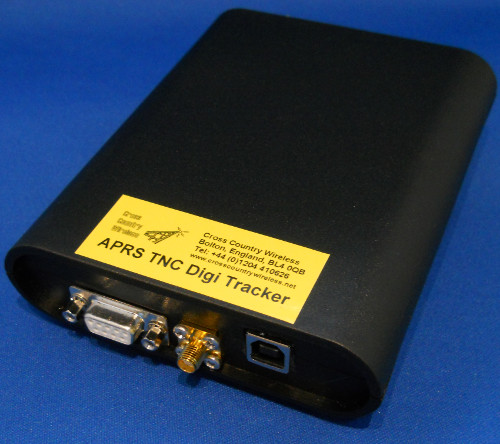 The APRS TNC Digi Tracker isn't just a mobile APRS tracker.
Connect to the USB port of a laptop, flick a switch and it also runs as a TNC with UI-View displaying local stations on the screen.
Flick another switch and it's a digipeater as well.

With the new Bluetooth version you can download a free Android app APRS Messenger Android from Google Play so that you can use your Android phone or tablet with the APRS TNC Digi Tracker as a head-up display and also to igate local APRS traffic to the APRS-IS (APRS Internet System).

It also has a built-in U-Blox Neo-6M GPS receiver with an internal dipole antenna and a SMA connector for use with an external GPS antenna.

The APRS TNC Digi Tracker set-up FAQ sheet can be downloaded as a PDF file here .

For further information the Operating Manual can be downloaded as a 3.1 MB PDF file here.

The latest drivers for the FTDI USB IC used in the APRS TNC Digi Tracker can be downloaded here.

A zip file containing the UI-View configuration file and text document explaining how to set-up UI-View to work with the TNC can be downloaded here.

APRS is a registered trademark of Bob Bruninga WB4APR. Click here to view Bob's website.
Cross Country Wireless is licensed by the trademark holder so that our APRS TNC/Digi/Tracker can be offered as a commercial product.

APRS is an international network of amateur radio stations providing real-time GPS based vehicle or event position reporting, weather reporting and simple message handling for educational, experimental or emergency use. APRS uses a common radio frequency of 144.800 MHz throughout Europe or 144.390 MHz in the USA. Digital repeating (digipeating) is used to extend the range of mobile and low power stations over a wider area. In addition to the radio network internet gateways provide a two-way port to the APRS-IS (APRS Internet System) so that stations local to the gateway can be seen worldwide on APRS viewing programs such as Xastir or UI-View.