Cross Country Wireless have released a Broadband Active Antenna with a frequency range of 200 kHz to 1400 MHz.

The antenna is a vertical antenna 800mm long with a built-in low noise RF amplifier. A base unit allows 12V power to be fed up the co-axial feeder to the antenna. Common mode RF chokes on all RF inputs and outputs including the antenna output to reduce RF noise when used in a noisy RF environment.

The latest version of the antenna uses a revised antenna element with multiple linear loading to give more gain at higher frequencies especially at 1090 MHz for ADS-B. The new version 3 design uses a 16mm diameter fibre glass tube to reduce wind loading.

The antenna is useful for airband or aircraft band monitoring as the HF SSB, VHF civil, VHF military and ADS-B frequencies can be monitored using one antenna.

The antenna is in regular batch production.

The Broadband Active Antenna FAQs can be downloaded here .

The Radio User magazine review of the Broadband Active Antenna in the January 2015 edition describing the early version of the antenna can be downloaded here .

Recent development of the antenna has resulted in a new broadband antenna element with higher gain at higher frequencies especially at 1090 MHz for ADS-B reception.

The plot shown above was made running RTL1090 software with a RTL-SDR dongle with R820T2 tuner connected directly to the base unit output of a Broadband Active Antenna.

The antenna element was mounted in the clear at 9m above ground level.

The plot shows coverage out to the line of sight range limit. 15m of RG213 cable connected the antenna element to the base unit.

No additional filters were used. 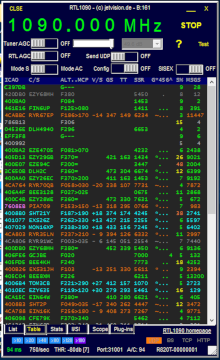 Note the high number of messages received from some aircraft travelling through the coverage area.


If you require more detailed information please contact us by email at info@crosscountrywireless.net