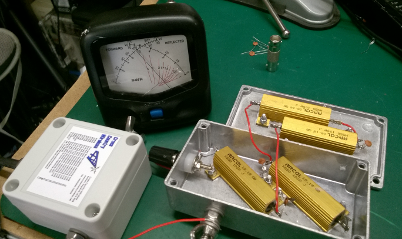 How many times have you been told that you can't use wirewound resistors at RF? Probably many times! On this webpage I show a method to make a resistive termination or dummy load that uses the inductance in wirewound resistors in a lossy low pass filter to extend the frequency range to cover the full HF radio spectrum.

Since I developed the Terminated Inverted U antenna I have had many questions mainly asking where to source a high power 390 or 400 ohm resistor to run the antenna at the legal power limit for amateur radio transmitting of 400W in the UK.

High quality panel mount wirewound resistors are available at low prices compared to thick film resistors. Was it possible to use them at RF? Conventional wisdom says no... 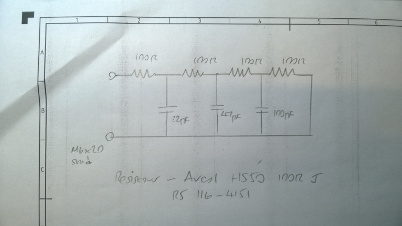 I calculated that if I added capacitance to ground from the resistor junctions it was possible include the inductance of the wirewound resistors as components of a low pass filter. The final values shown in the schematic diagram were proved after calculation and test.

The circuit uses the inductance in the resistors and the capacitors as a low pass filter with a cutoff frequency around 30 MHz. This allows RF power up to 30 MHz to flow through the resistors and be dissipated as heat.

The impedance match of the resistor low pass filter measured on a HP network analser is OK up to 30 MHz. The photo of the plot shows the return loss from 3 MHz to 50 MHz. Further tests running a constant 100W carrier into the resistor low pass filter circuit for ten minutes showed that the resistors were dissipating the power evenly and that the temperature rise indicated that the diecast box used would be suitable for running at the full rated power of 200W. This would make an ideal terminating resistor for HF use for the Terminated Inverted U antenna to work at the UK legal limit of 400W even for higher duty modes such as RTTY or FT8. 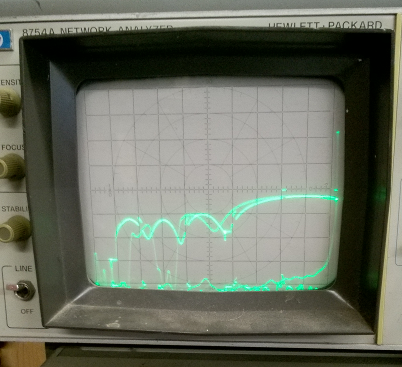 The new resistor low pass filter design works so well that we are going to manufacture it instead of the 50W thick film resistor unit for the same price. It's not often that you can get 4 times the power rating for the same price!

Recently I was asked if it was possible to make a resistor load for the antenna to work at the 1.5 kW US power limit. This would need a resistor rating of 750 W to absorb the power at the worst case antenna match.

It should be possible to use this technique to make a high power resistor low pass filter capable of working at the US power limit. If four 100W wirewound resistors were used and the heatsink assembly mounted in a metal can filled with oil like the old classic Heathkit Cantenna then it should dissipate 750 W safely.

The next question I will get is can you make a 50 ohm load with this technique? The answer is yes. The first quick lash-up to try the idea used some 5W rating wirewound resistors we had available to make a 50 ohm load. Arcol make 12 ohm versions of the 50W resistor so four in series would give 48 ohms with a 200W rating. If there is any interest I'll make a prototype and release the design.